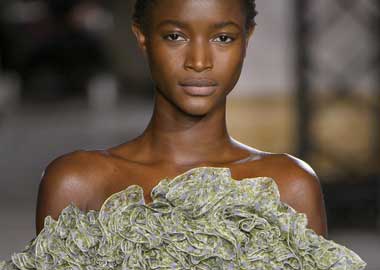 Giambattista Valli signed a poetic and intense collection. In the name of freshness and joy of life, the great Italian couturier creates a collection entirely dedicated to the theme of timeless youth that nothing will never erase.

It's the triumph of precious and delicate embroidery: everything is light and magical.

The female of Giambattista Valli as always is a true goddess, an amazing muse that embodies what femininity can express when is really powerful and sublime 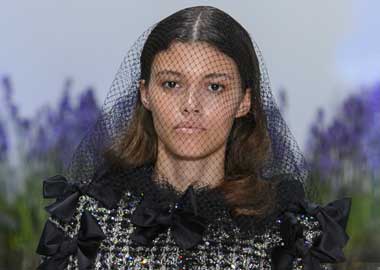 Faithful to what is left of its authentic stylistic code, that is the passionate love for all that is related to flowers and nature both in forms and especially in prints and colors, the great Giambattista Valli presents in Paris a collection Haute Couture fall / winter 2018-19 consistent with its heritage, but never predictable and forcibly bon ton. Rather. The Roman designer dares with feathers, embroideries and proportions both over and under and gives, through magnificent prints and overflowing multicolor embroideries, the idea of ​​a high fashion inspired by a magnificent Winter Garden like the Russian and Parisian ones of the Roaring Twenties. The cult touch is the skilful addition of elements inspired by pop and punk aesthetics, at the turn of the seventies and eighties, which makes each piece innovative and interesting, never naive but rather glamorous thanks to flakes, transparencies, necklines and splits that aim to outline the portrait of a woman deeply Diva and divine into her soul. 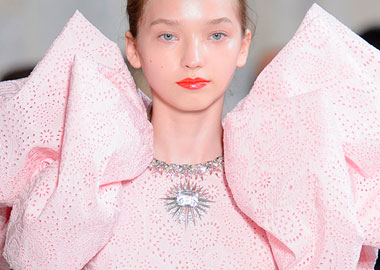 In his romantic and dreamy style that has always been at the heart of his high fashion collection, Giambattista Valli presented in Paris his last haute couture fall/winter 2017-18 collection, giving to the press and the public who loves him and follows him for years an essay of his innate ability to make feminine and sophisticated every woman thanks to his great imagination and creativity underpinned by a masterful tailoring.

On the catwalk it goes from mini, both wrapping as in A-line dresses in tweed for daytime  than in those with flouce skirt and top with sleeves puffed, even with train on the back until volumes before suggested by by studied drapes inspired to greek goddess and then absolutely compelling as during the grand final with grand soirée dresses that are a true triumph of tulle and  albeit between ruffles and overlappings, they look like light as clouds.

Giambattista Valli is a couturier with the will to seduce his clients gifting dreams and, as always, especially flower, at least symbolic, as in his floreal prints and his incredible handed embroidery that are a real spectacle of superior craftsmanship and poetry.

In his Winter Garden everything is like crystallized, time stops and the colours are those of the spring and between yellow, peach, pink, green aquamarine and coral, the couturier launched a haute couture collection at the bottom no season with the exception of a few garments in tweed and velvet. 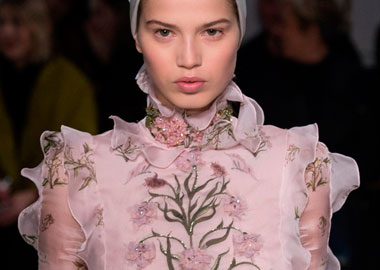 Unforgettable haute couture collection that enchantes and seduces with its colors and shapes. The next spring/summer 2017 signed by Giambattista Valli will be pure light and glamour thanks dresses able to awake in the eye and mind of the observers memories and suggestions stirring in the depths. The new haute couture spring/summer 2017 collection of this amazin italian couturier is the proof of the strong will to continue a personal stylistic journey that over time has masterfully articulated along a path in balance on the double track of tradition and experimentation, proceeding safely and shipped as a train though, as in all the paths that we track without maps or directions, he is animated only by the powerful desire to go ever further telling his aesthetics history.

This sparkling and creative spring/time collection is a real Manifesto of what the haute couture really is and it's frankly so nice to admire on the runway more than clothes an unbroken emotions. The magnificent creative dreams of Giambattista Valli, so unique and spectacular because their colors, embroideries, volumes and silhouettes, became reality, how it usually happens in the real haute couture world, in those During those magical and poetic treadure chest that are the atelier, direct heirs of the Renaissance workshops for the high level of craftsmanship that they are able to express. Here and only here everything was possible and only the sky was the limit. And today is just like then.

Mood: all the luxury of the Seventies
Lenght: mini or long, no halfway
Breadth: pants, embroidered minidress and shirt are tight while some dresses that are short on the front are very long on the back with amazing train until the maxi skirts made of thousands volants absolutely dreamy
Colors: yellow, liliac, brown, pink, pail blue, white, bordeaux, orange, pearl grey
Fabrics: satin, silk, mikado, lace, tulle 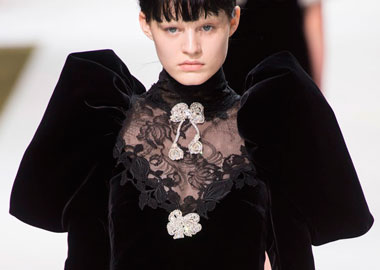 Giambattista Valli lives like in a beautiful garden and every season he's able to find a new flower that is a symbol of a new kind of inspiration. Romantic for excellence, experimental and sumptous for vocation, the italian designer win the challenge to combine in his new haute couture fall/winter 2016-17 collection the high fashion with the high comfort, creating dress comfy and wearable. His minidress realized in chiffon and enlighted vby fabolous ramages, tje skirts, mini or wide, the 3d embroideries on refined petite robe are the manifesto of a timeless style and the promise of a couture which fiercely looks to the future because is built on a creativity that firmly believes in elegance and above all it can express all its beauty thanks sublime tailoring tecniques. All this skills allow each season to Giambattista Valli to touch new heights of virtuosity. 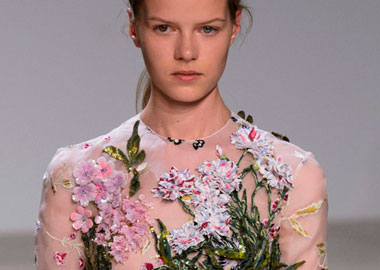 An absolutely sublime collection that shown in Paris by the brilliant Italian designer Giambattista Valli and dedicated at the haute couture s/s 2016. A triumph of dreamy, ethereal volumes between ruffles and ruches that enhance the total white minidress, with rigorous shapes and enlightened with precious floral embroidery. The world of nature still inspires the designer who loves to play with hyperbolic volumes especially in details, as in wide sleeves that start to finish almost in a balloon that surrounds the wrist.
Reigns a solemn joie de vivre and an aristocratic allure in a collection exhibiting contrasting prints, majestic hoods, skirts large and dreamy, besides games of asymmetric volumes games. No color screamed, only so much poetry in nuance choices to enhance a woman's romantic and upper class ideal.